There is a little secret about me that not many people know about. In my reading, when I come upon the topic dealing with this secret, my heart races, my ears perk up and I grab a pen, ready to extract any information I can…

My secret? I am interested in military strategy or the strategy of war. John-dear doesn’t share my love of war movies where I pick up some of these strategies, thus I sometimes watch them without him. I always learn something about life – not just the human interest part of the story, though I am often moved by the depths of sacrifice people will give for the sake of freedom. I’m looking for things like, ‘How do they do it?’, ‘How can they stand firm in the midst of such destruction and pain?’, ‘What resources do these men and women have that I lack in my own life?’ and ‘How do they not turn on one another in the chaos of battle?’ And I see parallels between physical warfare and spiritual warfare. I want freedom too and in many ways, I have to answer the same questions.

The Bible warns that in this life we will have tribulation and persecution. We are given various weapons of war to help us stand firm. There are hundreds of stories and examples to learn from. The journey of the Israelites to the land God promised and the establishment of the land is filled with stories of hardships and giants, territory to conquer and strongholds to knock down. Sounds rather like our journey, don’t you think?

One example is from Judges. I have always loved the angel’s view of Gideon in Judges 6:12. When he called out, “The Lord is with you, O mighty man of valor!’, I picture Gideon furtively looking around the valley floor to see who else is there. It certainly didn’t seem to describe Gideon, hiding from the enemy at the bottom of the threshing floor, but God is not bound by who Gideon appeared to be. God always sees beyond – calling forth from each of us something we probably don’t even see or realize lies within us.

Gideon looked like and acted like a terrified farmer hiding in the valley from the Midianites who made continual raids into the land. The passage reveals his belief that he was a nobody (6:15). But that’s not what God saw. Gideon was created for so much more. Gideon needed a reboot in order to see himself as God saw him. God had to bring him out of the shadows of who he thought he was, into God’s light so he could get a burst of reality. Are you tracking with me on this?

While Gideon focused on his weaknesses (uh, ok – I’m with him in this), God saw his potential. The Apostle Paul teaches us that our weaknesses are actually our strengths in God’s eyes. God opens the door at our very point of inability and weakness and steps in. As the story goes on, Gideon gathers an army together to fight the Midianites but his army was outnumbered big time (32,000 to 135,000). By focusing on his weakness and the disparity in the numbers, Gideon was sure to fail. And, then, to make matters worse, God told him, “Your army is too big. Send some guys home.” Uh-no. But as Gideon obeys and ends up with 400 stalwart souls to face an army of 135,000, God received the glory! The battle belongs to the Lord! And isn’t this how God comes sometimes? We look at our situation, our paltry resources, our anemic abilities and we throw up our hands in defeat. But God…

And this is when we have to learn to stand on the promises of God in His Word and stand on the shoulders of those who have gone before us who finished the race. I often feel the same weakness and despair I think Gideon must have felt. I need wisdom and prayer and the knowledge that others are standing firm with me. I’m not going down! With His help, I will continue to stand. Is anybody with me in this?

I love this picture of Finishing Strong. It so shows the outcome of the battle, doesn’t it? Ron DiCianni is one of my very favorite artists. I encourage you to go to his website (below) and look at some of his art and consider purchasing something. We have several pieces in our home. His way of painting is how I want to write and communicate. I am always encouraged by him. 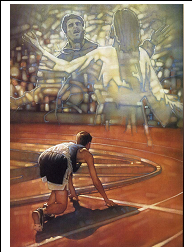